by thesambarnes, in Digital Project Management, with 12 comments -

I want to play a game…

I don’t, but how else can you start a Saw movie themed article?

So there I am watching the latest Saw movie (Saw 6), cringing at the gore levels and twisting plot lines when it hit me, the main character affectionately named “Jigsaw” (or John to his friends) is quite frankly an excellent project manager!

From that point on the movie took on a rather different perspective for me and was transformed into taking notes on how to run multiple projects with pin point precision (and kill people in imaginative ways).

In this article I want to discuss what an insane serial killer can teach all of us about managing projects, or has he calls them, games… 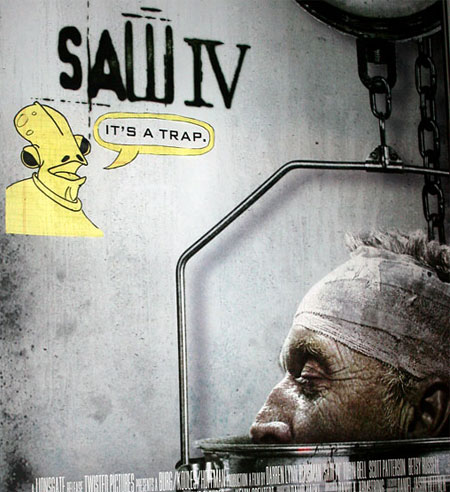 When starting a new game, or project, Jigsaw always conducts an excellent project kick-off meeting. Although always by video or audio (due to certain legal reasons), he always:

By following this set of pointers, a project manager should be able to conduct an effective project kick-off meeting that leaves everyone involved with a clear picture of the road ahead. 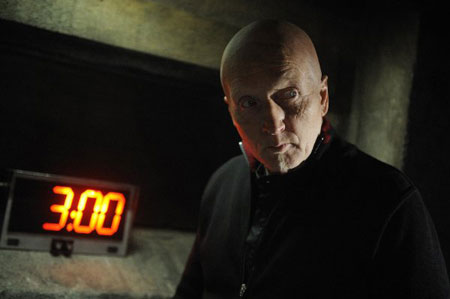 However, if you’re reading this John, I would recommend you allow for a little QnA session with people in this kick-off meeting to get other people’s input… just a thought.

One of the critical success factors of any project is planning, planning and more planning.

As I’ve mentioned before in my Pragmatic Web Project Planning series, project planning allows the project manager to:

There is little doubt that Jigsaw was a big project planning fan. His projects had to be so tightly run, without planning he would have definitely been arrested pretty early on, probably in Saw II.

But alas, due to his world-class talent at project planning, scheduling and excellent people skills, giving him the ability to pre-empt most mid-project surprises, he was able to avoid the law and keep his picture on the FBI’s Most Wanted page – hoorah for project planning! 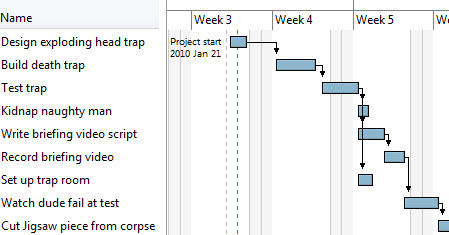 A snippet of a project schedule John kindly sent me

Personally I think Jigsaw would’ve used a Gantt chart as his primary project scheduling tool, as with many projects, more modern project management methodologies such as Agile or Kanban just wouldn’t have been suitable.

Either way, careful inspection of the Saw projects illustrates just how important project planning really is for effective project management, and serial killing.

During the Saw series Jigsaw enlists the help of three people for his project team; some ex-drug addict criminal, his wife and dodgy police officer called Hoffman – we shall refer to them as Team Psycho Nutbags.

Initially in Saw I, Jigsaw manages the project alone with good results, but as he moves onto managing larger projects he realises that he needs support and thus sets about creating his own project team. From this it is clear Jigsaw has learnt a vital lesson, you need a team to get the job done.

Working as a project manager with a team, Jigsaw demonstrates how delegating key project tasks to team members are a crucial part of managing successful projects.

Many project managers find this a difficult thing to do and usually it’s solely down to trust issues, in that the project manager doesn’t fully trust a team member to complete the task to a good enough standard thus adding risk to the project.

A key lesson Jigsaw has learnt however, is that when you empower team members with a certain level of responsibility they will often exceed your expectations and perform above and beyond. 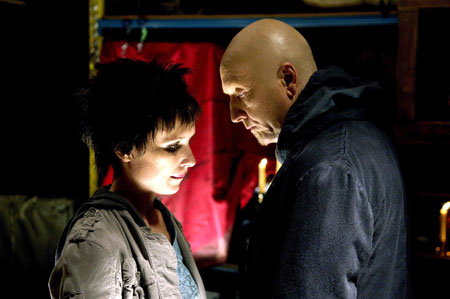 If as a project manager you have trust issues with team members and feel uneasy delegating key tasks to them, but at the same time clearly have a packed work schedule building death traps, you could start by delegating lower risk tasks to test the water.

These tasks would ideally be challenging but not soul destroying, or you run the risk of the team member thinking you’re just handing out the boring work you can’t be bothered to do.

When delegating any tasks it’s vitally important to always make it clear you are there for them if they need support.

In my experience, and I’m sure Jigsaw’s, what you tend to find is if you delegate the right tasks to the right people and are there to provide support, over time you will trust the team member more and more, they will feel and appreciate that trust and you will be able to hand over more project critical tasks thus freeing up valuable time for yourself to build those torture machines.

Not only does Jigsaw demonstrate a supreme skill set when managing projects, but he also understands the advantages in developing his project team’s skills. 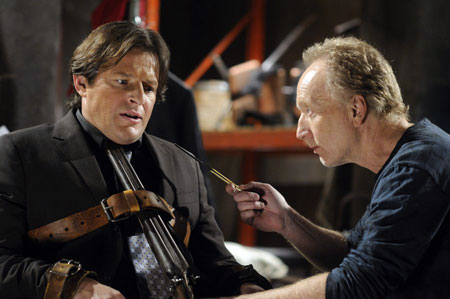 Throughout the Saw series, while personally managing multiple projects, Jigsaw is constantly teaching his project team new skills – but why when he has so much killing to do and so little time?

A good project manager will make it part of their remit to teach their team new skills for a variety of reasons:

In my experience, those who are willing to take the time to develop their teams are the ones that ultimately have the most success simply because people are more willing to work for someone who is clearly not just looking after themselves.

As with all projects, it is important to clearly define the markers that define a project as complete.

All too often I hear of projects that have been run really smoothly, encountered few problems until right near the end when the project manager is beginning to talk about completion and the client suddenly pipes up about how they thought they were going to get more features or services before the end… uh oh.

This situation mostly only arises when a project manager has not clearly defined the deliverables, and scope of deliverables, that will constitute the project as complete.

Jigsaw, an experienced veteran project manager never makes this mistake. As previously mentioned, he always clearly states what the project consists of and the victim is never under any other impression, just perhaps under a slow body crushing device with blades. 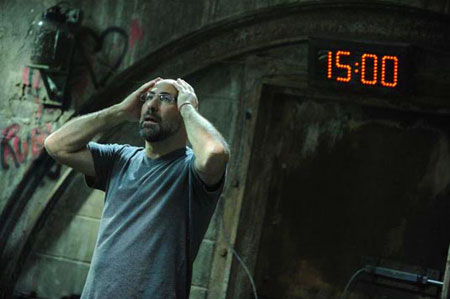 What do you mean we only have 15 hours budget left!?

Of course real life project management isn’t as clear cut as Jigsaw’s games (no offence John mate), and often what is stated as the project completion deliverables at the start of a project have changed dramatically by the end, but this is ok, in fact, I would say for larger projects this is completely normal and to be expected.

Many times I’ve been running projects that had several huge shifts mid-lifecycle, for example:

In each instance, it was required to re-state the project completion deliverables to the client and the project team so that it was clear to everyone involved where the finishing line was.

Hearing of a project suffering from lack of a clear finishing line at any stage of a project is a subtle way to identify those true practitioners of project management amongst the sea of people just pretending to be project managers… why?

Simply because establishing and re-establishing the finishing line is very easy to do if a project has been run according to project management 101 guidelines. 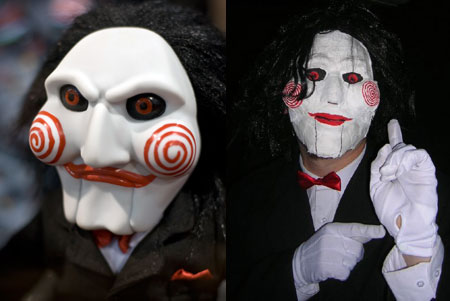 You can always tell a real project manager from a wannabe

In order to determine project completion deliverables throughout the project you just need to:

Generally, as with most project information, if you have been honest and consistent with the client from day one, they will understand that the initial estimations were a little off and a slight re-adjustment is needed that means neither side lose out.

It tends to only get ugly when the client has received few progress reports, been told everything is great for the whole project and then suddenly has a project manager pushing back on everything spouting “out of scope” and “over budget” phrases – phrases that must feel exactly the same as if the agency was cutting a jigsaw shape from their flesh!

Although don’t forget to always get your agency’s credentials in the website footer, always leave your mark – another great tip from John.

Despite all the bad feeling John’s players must have towards him and his games, if you could stitch all their limbs back together and re-animate them, I doubt a single one of them could whinge that they didn’t know where the finishing line was in their game.

Assuming you’re an awesome project manager like John Kramer, you will rarely come up against this problem of hazy project completion, and as well as the finishing line always being clear to everyone involved, you’ll also make sure you formally close the project with documentation and a client signature – ahhh, there is little sweeter than when you get the written confirmation that the project is complete and any extra work will require further funding.

Of course you could just try ringing or mailing the client and saying “Game Over”, but I just can’t see this going down to well, unless of course you have fostered a Saw movie theme with your client throughout the project, in which case you’re amazingly cool and so is the client and I want to be both of your friends forever and ever and ever.

Although this article hasn’t professed any remarkable project management revelations, hopefully you can see past the slightly odd dark association, don your 3D glasses, look past the initial visual layer and appreciate the links and inspiration you can make and take between project management, and general digital work, that you see in everyday life rather than just relying on project management books and blogs.

Phil Bennet’s Project Management is like Star Wars article, where he maps things like Han Solo being frozen in Carbonite and The Force to project management.

Adaptive Path’s SWSX 2008 presentation entitle 10 Tips for Managing Creative Environments where Bryan Mason and Sarah Nelson talk about how professional kitchens and orchestras are run as a tight knit team in relation to running a digital team.

Andy Budd’s presentation on UX where he presents analogies of website user experience based on when you first walk into a hotel lobby.

So the next time you watch a movie, order a coffee or arrive at a hotel, be a super nerd and try to recognise how the processes you see could help you in your current role.