by thesambarnes, in Digital Project Productivity, with 57 comments -

UPDATE: GTDify is shutting down as of March 24th 2012. But fear not, here are is an alternative hosted Tracks service that’s run by a good friend of mine i.e. a very reliable service:

In this article I’d like to simply let you know about the tool I’m currently using for my GTD system. It’s called GTDify – it rocks, and here’s why…

But first, in case you’re new, haven’t heard of GTD, a quick refresh I think…

In an article I published back in April 2009, imaginatively entitled GTD For Web Project Management, I explained the very basics of David Allen’s amazing productivity methodology / cult called Getting Things Done, or as followers call it, GTD.

If you haven’t read that article yet, or heard of GTD, I suggest you do so, so that this one makes a little sense.

But if you can’t be bothered, essentially I just talked about the parts of the GTD I personally use to help me manage my workload, web projects and digital account management tasks:

Next Actions, Waiting For and Someday are simply categories, or ‘contexts’ as per GTD terminology, that I arrange all my workload tasks in so that I have absolutely everything I need to do in one central place.

It doesn’t matter if it’s a small internal task my MD asked me to do, a critical decision I’m waiting for from a client or a project schedule I need to put together – everything is immediately captured in the To Do list and the right context.

Many people are good at keeping To Do lists, but few keep track of things they’re waiting for. Instead they keep this information in their head, which means their mind is always working when it could be resting. 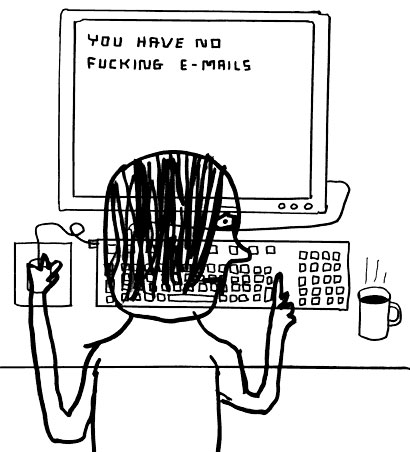 A surreal take on Inbox Zero

Aside from the psychological benefits this brings, achieving Inbox Zero also means you have succeeded in getting your whole task list into one centralised place and can now process any new e-mails that arrive very quickly.

In essence, GTD is all about giving you a productive way to work that puts focus on getting all your tasks captured in one place, a system to get through those tasks and all while keeping you as stress free as possible by having nothing inside your head – a natural state for Jeremy Kyle addicts.

As I always state, I only use a very small portion of the full on GTD system, but it works for me.

However, last time I wrote about GTD I was using 37Signal’s excellent Backpack tool to implement GTD. It was awesome at some things; list ordering and ease and speed of use, but didn’t have a few things I felt were important in a GTD tool (not that it ever claimed to be a GTD tool)

Well, my search could be over.

My weapon of choice – Tracks & GTDify

Introduced to me by Branden Faulls of Clockwork Robot, I initially got a colleague to setup a version of Tracks, an open-source Ruby on Rails tool, on my VPS and began to use it – it was perfect, except for one thing, it kept crashing my VPS – my heart was broken.

But then suddenly, in a last act of desperation I Googled and found a free hosted Tracks solution called GTDify – my heart was mended and for the last six months I’ve been happily using GTDify – I’m so happy with it I thought it was worth sharing.

So why do I love GTDify and Tracks so much?

I love GTDify simply because it allows me to have a free hosted version of Tracks that never falls over on a n00b (me) VPS.

I love Tracks because it seems to cater for all the things my version of GTD requires:

Reading that list I’m sure many of you are thinking of tools you know of that satisfy all these requirements, but I’d bet you a million squids that I’ve not only heard of them all, but tested each and every one. Please leave the names of tools you thought of in the comments!

They all seemed to do 70% of what I wanted, but never everything, and if they did most of what I wanted, the user experience was poor and managing tasks became a chore rather than the effortless exercise it should be.

It’s quite difficult to explain why I love using Tracks so much, but perhaps by showing you a few features it’ll become clear.

Getting started without vomiting

Unless you’re a Ruby freak and can download, install and configure a copy of Tracks on a server, get yourself over to GTDify and sign-up for a free account.

Once you’ve got your account and logged into your hosted version of Tracks, start by avoiding the temptation to vomit and the laugh at me for having the nerve to suggest a tool to you that looks so basic – don’t be fooled!

The user interface isn’t stunning or glossy, but as you’ll learn if you give it a chance, it’s highly functional and intuitive, to the point where you don’t have to think when using it – perfect.

In this section I’ll go through my typical Tracks / GTDify setup steps so you can get a feel for the app.

Not the nicest preferences screen you’ll interact with, but it has the options I need and is generally a ‘visit once only’ part of Tracks and GTDify so screw it. 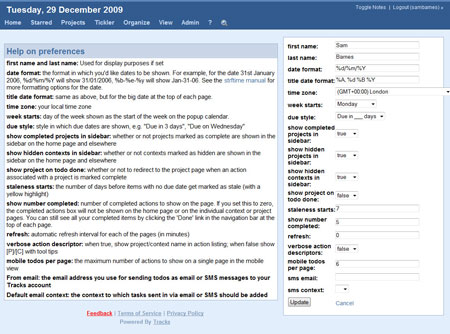 Next create the Contexts you want. Personally I go for only three.

GTD purists will probably use a more Contexts than me, including ones that allow them to process work by, well, ummm context, for example @E-mail, @Phone and @Office etc.

If it works for you, go for it.

Tracks and GTDify allows you to create Projects in two ways; using the Projects tab, or defining a new project when creating a Task – happy days. 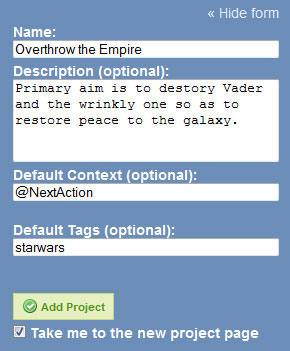 Tracks has a lovely interface for managing your projects

So that’s it, a quick setup and you’re ready to start adding tasks. 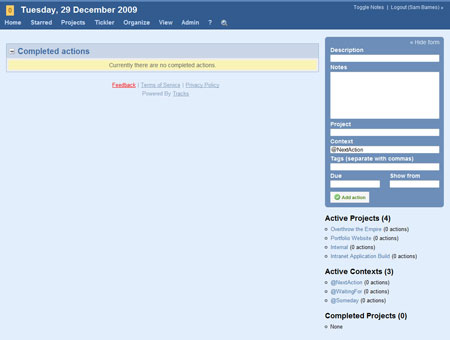 Screenshot it! Your To Do list will never look this empty again

To me, adding tasks, more importantly how quick and easy it is to add tasks is a critical success factor of any GTD tool; if it takes longer than a few seconds or requires any more than a couple of brain cells then chances are the tool won’t work. 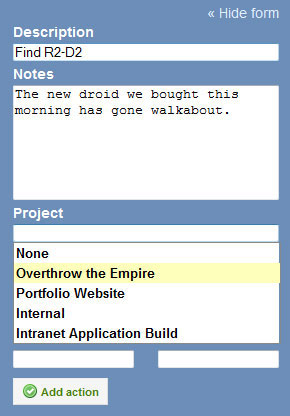 As you can see from the screenshot, Tracks provides you with an intuitive live suggestion or UI element for each field, thus making adding a task a breeze. 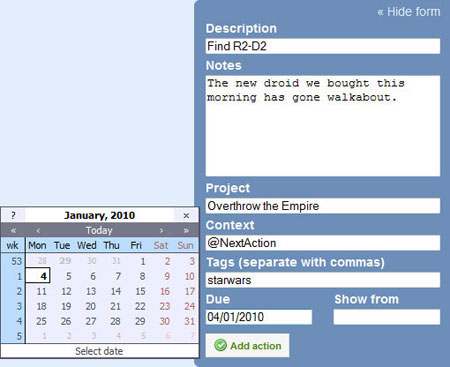 Date pickers were all the rage on Tatooine

And that’s it, Next Action added.

Once you’ve added all your tasks you’ll begin to use Tracks as it was intended and the dashboard will be your new favourite screen. 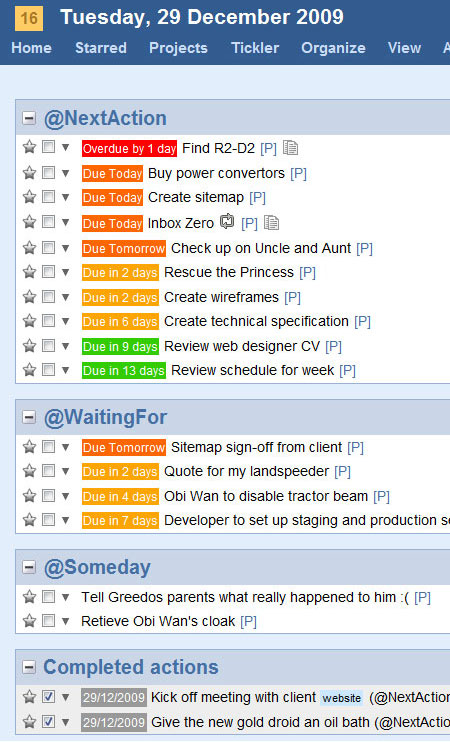 Run web projects and bring down the Empire with GTD, easy

As well as the basic features you’d expect, Tracks also has a couple of other useful features, for example:

Tracks and the iPhone

If there’s one thing, other than a little UI polish, that would make Tracks the ultimate solution in my opinion, it’s an iPhone App. 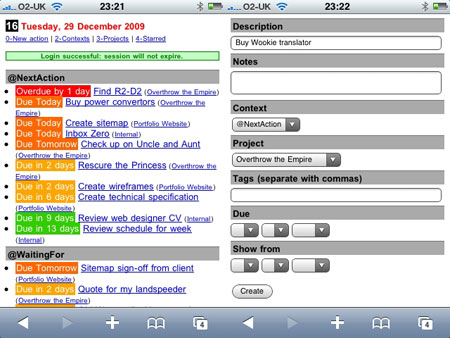 Currently there is a mobile stylesheet, but as with most, it’s not great. It does allow you to review and manage your task list on the go, but its slow going and not something I use very often.

Tracks also comes with a reporting system that is collecting data from the minute you start using it. Although I haven’t found much use for it, boy does it look cool! 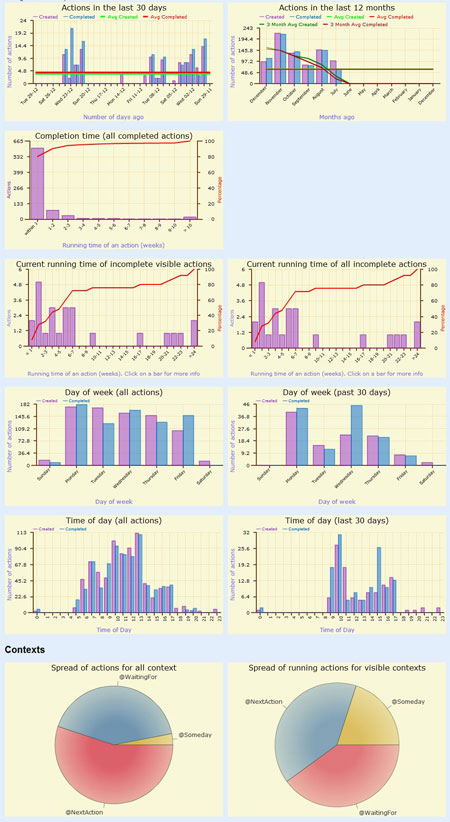 Hopefully, if like me you’re just looking for a nice web based GTD tool that does the simple things well, this review will encourage you to try Tracks and GTDify.

It works amazingly well for me and just maybe it will for you too. But I’m curious, what’s your To Do list tool of choice?